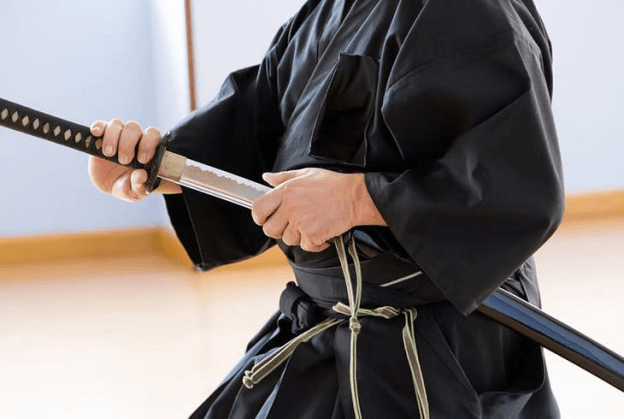 The samurai warriors of the Japanese Empire were legendary. Indeed, they remain one of the best-known warrior ranks in the history of the entire world. Movies, cartoons, animations, and comic books have been made about this deeply revered group of warriors who were known for their stoicism, bravery, loyalty, and profound honor, which they valued above personal life. So much so, that their code of honor dictated that a samurai would instead commit suicide by disembowelment before he could dishonor himself, fellow warriors, his caste, or emperor. It’s no legend, but a grim reality, that a good number faced this fate. So what are the main types of Samurai swords?

The Origin of the Samurai

Almost two millennia ago, the first Japanese swords were forged into existence. These swords were known as Chokuto, and their design borrowed heavily from the Chinese style of swords. With time, and as Chinese influence on Japanese culture declined towards the 11th century, the sword blade got more curved. The clan wars of the day became heated, and as a result, there came up a new order of warriors who became known as the Samurai, also called the “Bushi” or the “Buke.”

The Birth of the Katana

Mongolian invasions became commonplace, and as defense became a necessity of life, the demand for weapons spiked. This caused a rise in sword making. It is in this period that the famous Katana came into being. Interestingly, Katana refers to the curve as well as the process of making the blade. Masamune established the Soshu tradition of sword making. Over the centuries, the Masamune Katana swords have always been considered the best swords ever made.

There are four types of Samurai swords, but we shall look in detail at the three main ones:

The koto period of Japanese history featured a sword whose blade handle was curved. The Samurais carried this sword with the sharpened edge facing downward. It was known as the Tachi.

After the Tachi came to the Uchigatana, this word is actually derived from 2 words; Uchi (meaning to strike) and Gatana (which literally translated to “a sword”). The Uchigatana swords became more refined in design and eventually replaced the Tachi almost entirely.

As it is wrought to happen, there was a proliferation of western civilization swords in Japan come the 19th century. While this by itself may not be a bad thing, it was unfortunate that the foreign swords were not as beautifully nor reverently crafted as the authentic Japanese sword.

As any civilization with pride in its culture would, the Japanese responded to that by bringing back the Uchigatana, with a relatively modern twist. The result was the Shin-Gunto, literally translating to “new army sword.” As the name suggests, it was the sword of choice for the Japanese army, and come World War 2, was used to behead their prisoners of war. This is pretty gruesome, right?

The Daisho (meaning “Big/Little”) is actually just that – a pair of swords, one big (Daito), and the second smaller (shoto).  To date, it is the best known Samurai katana.

Final Thoughts- How to get an Authentic Samurai Sword

Obviously, buying a samurai sword from any website that claims to be having them will very likely end up disappointing you.

It is therefore recommended that if you must buy online, buy from a verifiable website. We would like to, however, advise that you go to Japan yourself and have Samurai sword crafted by a specialist forger; after all, that is where they originated from, right?

Ensure that your blade is made of properly tempered steel with a steel alloy whose carbon content is 60 – 70 points. An authentic tempered blade will have a legitimate Hamon line, sharp while perfectly balanced between flexibility and strength. A real Samurai sword will actually always have a Mekuki, which firmly affixes the blade to the handle.

Why Samurai Swords Are Iconic in Japan

Top reasons why artwork is in hot demand