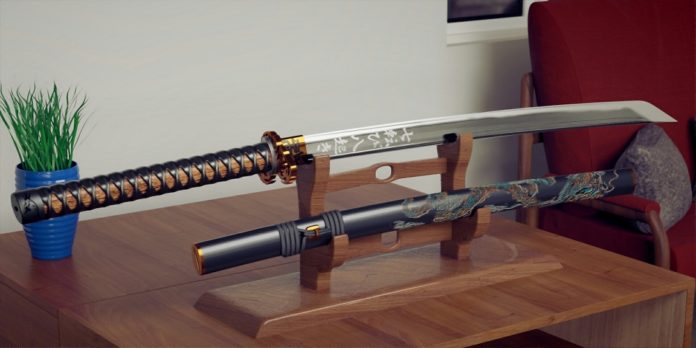 The Japanese samurai were known for carrying strong and flexible swords that have a super sharp cutting edge. Since the eight century, samurai swords have been a symbol of status in Japanese society. Because of this, many swords were considered deadly weapons and as valuable family heirlooms. In fact, you can find several Japanese medieval samurai swords in Japan’s official list of National Treasures.

What makes samurai swords stand out?

Samurai swords are known to cut almost any object with just one single blow. Samurai swords were made using steel in specialist workshops. The manufacturing process employed to create them dates back to the Nara period in 710 CE.

Master craftsmen made sure they control the carbon content in different parts of the sword, giving it more strength and flexibility. As a result, the blade has a multi-layered complex structure that makes it more flexible and durable. The position of the contrasting metals gives the Samurai swords its curve.

Once the blade is finished, it is passed to a sharpener and polisher. Various grades of stones and water are used to achieve the gleaming sharp sword. The blade is then returned to the swordsmith, to engrave the marker’s signature.

The complicated process made swordsmiths enjoy a close to religious air of mystery around them. They were given high social status in society for their skills.

Did you know that the elite samurai carries two swords? They are actually equipped with a long samurai sword and a short samurai sword. The pair of blades were referred to as “daisho,” meaning “great and small,” and these swords are made to match in color and décor.

The long samurai sword is known as the katana. The katana is usually about two feet long.

The short samurai sword is known as the tsurugi or wakizashi. This blade is 30cm long.

Another type of samurai sword is the tachi, a larger blade than the katana since it is about 3 feet long. The Taichi sword is usually used for religious ceremonies and as family heirlooms.

The samurai also carries the tanto, which resembles a dagger. The tanto is 20 inches long and is considered a very convenient weapon as it can be used as a knife.

The introduction of guns in the mid-16th century CE significantly contributed to the decline in the use of samurai swords. Despite this, a samurai sword was still revered as mystique even though they are no longer being used on the battlefield. Swordsmanship still remained as an admirable skill to the elite. Today, you can always find a handmade swords expert that can produce the same care and attention to their products the same way samurai swordsmiths did centuries ago.

There is no doubt that a combination of technical expertise in steelworking and passion for the art meant that so much care and attention are being placed in every samurai sword. This makes Samurai swords among the finest and sharpest weapons produced in the world.

The Japanese Warrior Swords and Their Meaning

Top reasons why artwork is in hot demand